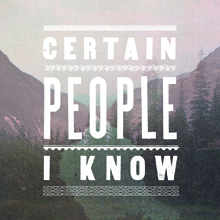 Originally formed in 2009, Certain People I Know were the new vehicle of former Braid/Hey Mercedes vocalist/guitarist Bob Nanna and drummer Damon Atkinson. They wrote a handful of songs and played a few shows in and around Chicago before sort of fading back into the darkness. Now, three years after their presumed dissolution (or at the very least, extended hiatus), the band are finally releasing their nine-song, 28-minute album, originally recorded in 2009 and mastered in 2010, and it serves as an interesting road marker for Nanna's songwriting.

These were the first full-band, consistently rock-based songs Nanna had worked on since Hey Mercedes' Loses Control in 2003, and it shows—having focused much of his creative efforts either on his solo project, the City On Film, or a series of bizarre, funny and occasionally genius Threadless jingles, his voice almost sounds too timid and delicate for some of the more aggressive, push-pull instrumentation. Elsewhere, he trades off vocals with Lauren LoPiccolo (“All You Gotta Do Is Show,” “Our Lady Of Guadalupe”), and the vibe is similar to that of Farewell Continental's Justin Pierre and Kari Gray, in that the female counterpoint does everything in their power to mimic the male point, with very similar vocal lines and phrasings. Her vocals are breathy and soft, though, and aren't a strong match for the propulsive music. Additionally, even though she played keyboards for the band's live show, they are seemingly nowhere to be found on Certain People I Know, and her vocals are completely absent from the last half of the album, save closing track “How Was The Show? (Politics),” which sounds more like a solo song than a CPIK song.

Musically, f you're a fan of Hey Mercedes, you'll find plenty to enjoy on Certain People I Know. The album really steps it up once the first four songs (already released as a demo in 2009) are over. “NYE” is full of whip-crack drumming courtesy of the always-brilliant Atkinson, and the melancholy chords Nanna and Jeff Dean (also of the Bomb and Dead Ending) coax out of their respective guitars are heartbreaking. Album standout “King Of Shots” is the closest Nanna gets to really letting rip vocally, backed by an uptempo song with palm-muted verses and soaring, jangly choruses. Its energy is infectious, and missing throughout most of the other songs. Too often, the band don't seem confident in the material. The parts are pretty, but many of the songs feel like leftovers from Nanna's more prolific songwriting years. Of course, now that Braid are back together and writing new material (as evidenced on 2011's dynamite Closer To Closed EP), these songs feel less like a rehash and more like an emptying of the closet. CPIK may not have been Nanna's most successful or popular band, but they served a very important role in his musical mythology—the rebound.