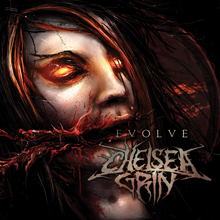 If there is an original idea on Evolve, Salt Lake City’s Chelsea Grin have done a damn fine job of concealing it. The shades of blackened death metal in their Suicide Silence-esque bludgeon (first seen on 2011’s My Damnation) have grown even more prominent, with gothic flourishes adding a little personality to proceedings. “The Second Coming” and “S.H.O.T” swirl with contorted, brutal death-metal fretwork in between thudding riffs, guitarist Jason Richardson (ex-Born Of Osiris) making his presence known. At the same time, vocalist Alex Koehler continues in his attempt to barf up a lung, but as on previous releases, his shriek lacks the bite of his low-end grunting and detracts from the violence backing him up. For the most part, this is pretty workmanlike stuff, the chorus of “Lilith” stolen from Fear Factory’s bag of soaring crescendos (though the drama of it is affecting nonetheless).

Far and away the EP’s highlight is “Don’t Ask, Don’t Tell.” Slowing things down a little, the band infuse the music with more melody and a greater sense of scale as well as a palpable sense of aching regret, the track expanding upon the soundalike chunder that precedes it. It is not without its violence, boasting plenty of pneumatic chugging counterpointing its more graceful aspects and thereby increasing its impact and intensity. What most sets the track apart though is that it finally shows the band have an identity of their own somewhere behind their influences. For many this will be too little too late, but as the herd of death/metal/whatever-core inevitably thins in the coming months, they may stand a chance of surviving.