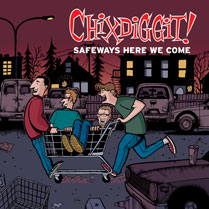 It’s no secret to the underground that late-’90s-style pop-punk has really come back into vogue over the past few years. However, the exhumation of short, sad, silly songs about girls came at a time when Auto-Tuning vocals and quantizing drums was the norm in pop world. The result is a slew of albums that have a sterile sheen over the raw fun and emotion that made this music break into the mainstream in the first place.

Enter Chixdiggit!. The under-appreciated Canadian pop-punkers seem to have risen from a long period of dormancy to teach the new school what it’s all about: short, sad, silly songs about girls from the heart, not the brain. Clocking in under 17 minutes, there isn’t an ounce of filler on this fantastic EP. Singer KJ Jansen joyously belts out a torrent of catchy melodies over a rhythm section that harkens back to later Descendents, and instead of sounding like studio magic, it feels like a band that have actually learned how to play together and enjoy it.