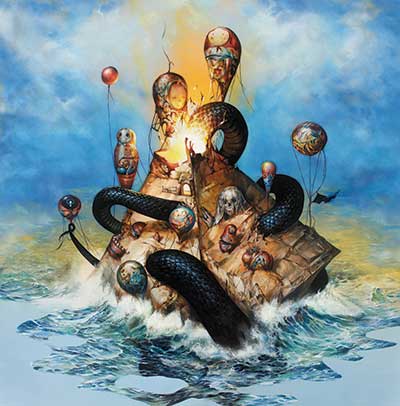 At some point, it probably becomes fruitless to review new Circa Survive records. The band are a model of sonic and psychic consistency, ever since they brought us the explosive debut album Juturna in 2005 and through their dabblings in psych-punk (2007’s On Letting Go), ’90s alt-rock (2010’s Blue Sky Noise) and expansive prog (2012’s Violent Waves). It should come as no surprise, then, that Circa’s fifth album, Descensus, falls in line as an incredibly strong, innovative album in a catalog already littered with them. In short: This shit rules.

Circa fans are among the most hardcore there are, whether it be because of worshiping Anthony Green’s otherworldly vocals, the gorgeous guitar interplay of Brendan Ekstrom and Colin Frangicetto or the lockstep-yet-off-kilter rhythm section of Nick Beard and Steve Clifford. Those fans will find little fault in Descensus’ 10 tracks (outside of the 54-second quasi-instrumental “Who Will Lie With Me Now,” which feels like one of those weird sound experiments on Christie Front Drive’s Stereo). You want a scorching barn-burner of an opening track? The chaotic, unrelenting “Schema” delivers in spades, with its first 10 seconds alone sounding like the perfect soundtrack to Armageddon. Like your Circa a bit more playful and carnival-esque? Look no further than the 5/4-time “Child Of The Desert,” with Green’s mild croon lulling the listener into a false sense of security even as the instrumental begins to intensify until he erupts with a devilishly powerful scream.

As a whole, Descensus feels much looser and organic than anything Circa have done before, almost as if the band are finally comfortable in their own skin. But instead of resting on their laurels, their shared comfort allows for a previously undiscovered artistic progression; like on the gorgeously subdued “Phantom,” a track driven by keyboards and soft brushstroke drumming, only allowing for an occasional guitar line to enter the arena, to add unexpected texture and nuance like Deftones covering Sade.

“Nesting Dolls” gets its narrative out of the way early, instead relying on a monumental, Explosions In The Sky-esque buildup that, impressively, doesn’t detonate at its peak, choosing instead to level off after about four minutes of a steady, emotionally resonant crescendo. When writing repetitive, post-rock-influenced music, it can be considered the easy way out to insert the “rock out” part at the end—it takes a true artist to resolve it in a less-expected (yet totally successful) way. That’s just one more piece of evidence proving Circa Survive are far and away one of the best bands operating today, and why Descensus is yet another gold star in a career already full of them.