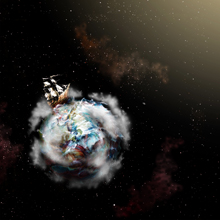 Nothing about the path Circa Survive have taken over the last seven years has been surprising. Formed by the adored frontman of a cult favorite and a handful of seasoned musicians with strong roots in progressive hardcore, the band release a couple of incredibly well-received albums for a revered indie label, growing their fanbase significantly; they make the jump to a major and issue possibly their best record to date; fail to see mainstream success regardless; and decide to go the independent route. This story's old, but it will go on and on until Circa disappear. But if Violent Waves, the act's first album since shaking free of Atlantic Records' shackles is any indication, let's all hope that moment doesn't come any time soon.

It would be hard not to call Violent Waves Circa Survive's best effort to date. Everything fans have come to expect in a record of theirs is here, but amplified: sprawling, immersive atmospheres that actually feel atmospheric; frontman Anthony Green's raspy, inhuman yelp stretched to its dynamic limits; a sparkling, beautiful recording (self-produced this round); and a fragile undercurrent of tense emotion seemingly prone to break at any given point. While influences on their past records were relatively easy to pin down (namely the creative peaks of early-’00s post-hardcore like Engine Down and Cave In), they're unified in such a way now that feels distinctly “Circa Survive.” They pace the record with an indelible patience that demands the same from listeners, but rewards them throughout the journey.

Book-ended by a pair of seven-minute-long tracks (the two lengthiest in the band's songbook), “Birth Of The Economic Hit Man” starts the record subtly enough, but less than two minutes later, Green's howling a gritty chorus. As short as the buildup is, it feels completely natural in Circa's crafty hands, and it's an apt preview of what's to come. It's hardly the sole trick up their collective sleeve, though. “Sharp Practice” employs funk flavoring with an unusual urgency and a demurely upbeat chorus; guest vocals from Zolof The Rock And Roll Destroyer's Rachel Minton brings an Eisley-like prettiness to the balladic (but hardly sappy) “Suitcase”; “Phantasmagoria” stews in prog, folk, country-rock twang and psychedelic tones seamlessly. There's also the epic, wildly memorable “The Lottery”: a driving intro; lurching stop-start verses that resemble At The Drive-In at half-speed; and a sneaky crescendo to the gorgeous, brooding chorus. On top of that, Geoff Rickly is actually responsible for singing said chorus, his first recorded appearance since Thursday called it quits in late 2011. His modest, breathy delivery adds a brand new vocal dynamic to Circa's sound, blending in perfectly.

One would think that the happily married and child-rearing Green (check out AP 283’s cover story) wouldn't have any more demons to exorcise, but Violent Waves' title doesn't lie. The enigmatic singer portrays a picture of strained disconsolation in “My Only Friend” and the aching “Think Of Me When They Sound,” which hints at an ex-lover finding eternal happiness with another. Wherever he's pulling from for cathartic acts like these, it's a porous wellspring of emotional inspiration that keeps the record grounded and contemplative. Even in a stretch of optimism, like on closer “I'll Find A Way,” Green sounds assuring in a mostly humble manner.

Perhaps the only surprise about Violent Waves is how strong and focused, creatively fierce and yet cohesive Circa Survive sound despite the oncoming pressure of taking on this record all themselves as a considerably popular band. While they've journeyed a route so many before them already have, few have achieved this level of artistic success and character development in the process.