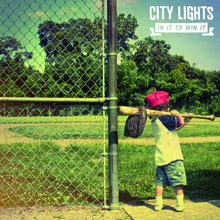 In It To Win It

Aren't the boys in City Lights a little too young to be griping about getting older? Yet, that's exactly what they do on their debut album. These fresh-faced pop-punkers spend the entirety of “Please Let Me Know” venting their spleen about kids these days “talking shit on the Internet” and singer Oshie Bichar missing the days when he “had the entire world at my feet and not a worry on my mind.” For some young-ish fans, this is going to be a new mantra to use in their daily fret sessions. But for us older folks, get ready to hear the cries of “Get over youryelf!” In fact, if you're over the age of 30, you will likely find yourself saying that a lot as you listen to In It To Win It.

After they are done bemoaning the good old days, they spend some time calling out a young maneater (“Trophy Room”), and raking flavor-of-the-month punk bands over their lukewarm coals (“I Made A Song On Garage Band And All I Got Was This Lousy Record Deal”). At least the closing “What It Takes” expresses some honest sentiments about facing an uncertain future. Everywhere else, it is the sound of five young men taking themselves far too seriously.

City Lights should keep the strongest elements of their sound—chiefly their fine punk riffage and boundless energy—and embrace their youthfulness as completely as they do on “Just In Case,” where Bichar sings about partying with his crew. Have the band mine their Twitter feeds for lyrical inspiration (“Just got told I look like the dude from Breathe Carolina. I really need to cut my hair,” “I'm so thirsty but too lazy to leave my bed. Whenever I get up I'm going to get v8, purple Gatorade, and dr pepper and drink em all!”). Leave the backwards glances and bitter ruminations about lost opportunities until your 10th album.