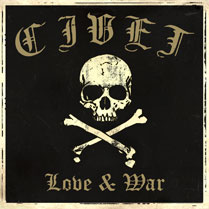 The second Hellcat release from Civet is a raging dose of rockin’ punk that will appeal to Social Distortion and Joan Jett fans alike. Frontwoman Liza Graves roars like Jett with a migraine, and her three bandmates—guitarist Suzy Homewrecker, bassist Jacqui Valentine and drummer Roxie Darling—keep the music driving forward with plenty of pick slides, Bad Religion-esque backing vocals and occasional handclaps. “L.A. Nights” and “Sunset Strip” are paeans to their hometown; the former could be a theme song for L.A. Ink. Other tracks evoke a particularly streetwise version of sisterhood, gang fights, and romantic disillusionment. “It’s The Truth” and “Reap What You Sow” are too long at nearly five minutes each; the band’s strength lies in hard-charging tracks like the two-minute “Deadbeat.”