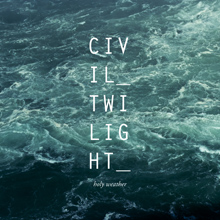 Civil Twilight sound a lot like mid-period U2 crossed with Peter Gabriel’s moody theatricality; their music is grandiose but much more downbeat. Certainly part of that is frontman Steven McKellar’s breathy, echo-laden vocals and stylistic tics (like cooing oohs and ahhs over the guitar breaks) that suggest a youth spent in thrall to Bono. Similarly, brother Andrew McKellar’s guitar lines can often resemble the trebly shimmery tone of the Edge (though they move and swell more like those favored by Muse’s Matt Bellamy).

Holy Weather is the Cape Town, South Africa, trio’s first new music in about five years (their self-titled debut was self-released in 2007 and reissued by Wind-Up in 2009). The ensuing years seem to have taken some starch out of their collar. While the songs still move with measured sophistication, they aren't imbued with as much meaning. Indeed, they seem to possess more urgency and greater concision. (Half the songs on their debut tipped the five-minute mark; here, less than half even break four minutes.) Even the U2-isms seem to have taken a backseat to samples and mood that owe a debt to Radiohead.

“Fire Escape” works a Dr. Who-inspired keyboard fill and a funky martial backbeat into a spunky slice of modern rock. While the multi-movement “Holy Weather” isn’t up to its prog-tinged ambitions, the gentle, soul-flavored “Sweet Resistance,” with its dub undercurrent and soaring harmonies, suggest an even more rewarding pop direction. Another highlight is “Highway Of Fallen Kings,” which picks up the Springsteen staple of a character on the run, “already too far down,” and gives it the meditative, burbling, keyboard-driven air of the Postal Service.

Civil Twilight have let their moody songcraft dominate, which allows the push-pull of the arrangements amplify spare, less overwrought lyrics. Guitars are often more about color, letting the samples and beats key the song, which tends to produce a funkier, more danceable energy. That’s important, because otherwise, the songs are understated and somewhat dreamy. As is, the songs could probably use some stronger hooks to anchor them, but Holy Weather is a clear and striking move forward. From here, they could just as easily become an intriguing legacy artist such as Gabriel or a pop sensation like Coldplay.