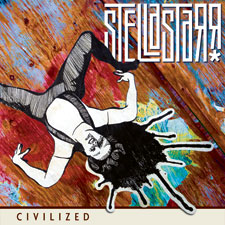 On Civilized, stellastarr* are barely recognizable as the same NYC rock darlings who yelped through tunes like "My Coco" earlier this decade. This isn't a good thing. Although the band's noisy interludes and Britpop tendencies occasionally hit the mark-the soaring "Tokyo Sky," mod-glam dance party "Zombie Prom" and the Bloc Party-ish synth-pop race "Robot"–Civilized sounds murky and unfocused. Shawn Christensen's vocals are buried in the mix (and his awkward phrasing conjures either a drunk chipmunk, creepy-old-man Robert Smith or cartoonish Bob Dylan), while songs fly by with no memorable structure or hooks. Only Mandy Tannen's contributions stand out-specifically, her livewire bass lines and ethereal vocal harmonies, as on the bottle-rocket-exploding dance-punk shot "Numbers." Come back, Black Kids; all is forgiven.