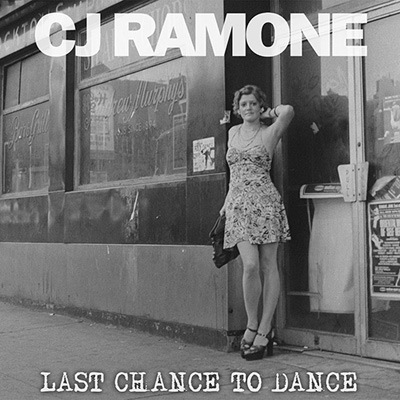 Apparently, even if you’re not one of the original quartet that started the peerless punk band 40 years ago, if you’re a Ramone, you’re a Ramone for life. At least that’s what Chris Ward (aka CJ Ramone) would have us believe. Though he joined the group well after they had recorded their classic albums, he isn't letting go of his chosen surname nor the sound of his former band.

Ward has especially held tightly to the punchy, mid-tempo attack that Ramones cranked out during his tenure. The music he wrote for his former band Bad Chopper and now his two solo albums are no-muss, no-fuss punk records that perfectly suit his pleasant affectless singing and songwriting voice. On Last Chance To Dance, the bassist/vocalist takes on the role of a man forced to join the military as a means to support his family (“Won’t Stop Swinging”), the embittered romantic (“‘Til The End,” “One More Chance”) and the careless cad reminding some poor hanger-on that she’s just a “temporary distraction/A pit stop on the way to the action” (“Pitstop”). And he does it all to tune of songs written to ape some of his former band’s best.

Where things get murkier on Last Chance is when Ward attempts to mix the personal with the political. His ode to the AK-47, “Mr. Kalashnikov,” is one of the odder choices in that lyrical realm. Close in spirit to “Scattergun,” a song he wrote for Ramones’ final studio album ¡Adios Amigos!, Ward preaches the joys of getting his “ya-yas out” at the shooting range, looks down his nose at the “sissy little gear queers” that would choose to swap out the rifle’s stock trigger, and sticks to a chorus that says, “Every common man with a gun in his hand is what we’ve gotta do.” I’m going to take Ward and his publicist at their words that this song is meant ironically, but I’m having a hard time finding the knowing wink or commentary buried in the lyrics. Even more troubling is the possibility that some firearm enthusiasts are going to lift this up as a personal anthem.

I’m also going to accept the word of the folks at Fat Wreck Chords that the album’s closing song “Cluster Fuck,” is a blanket statement about politicians rather than being directed at anyone specific. But there’s no denying that the lyrics are couched in language often used against our current commander-in-chief: “You can promise us a real bright future/But it’s all fading to black”; “The new messiah is now a pariah/This ship is sinking faster every day.”

Obviously, Ward can sing about whatever the fuck he wants. There’s no argument there. The concern is that these cloudy messages wind up muddling the whole of the album, the joys found in the songs early on in the album are dimmed as we try to parse out his meaning on the rest.