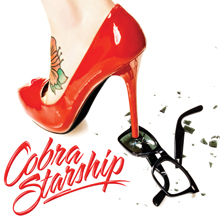 Cobra Starship’s music is always best taken at face value—and by that, we mean the cost of a half-dozen vodka-Red Bulls at the club, immediately followed by a late-night Taco Bell feast. In other words, there may not be much substance to it, but it’s still a guilty pleasure. After some electro-pop heavy petting on 2009’s Hot Mess, the band have severed any remaining pop-punk ties completely with Night Shades. Instead, Cobra Starship are serious about creating a dance-worthy club record. Just listen to the album’s first single, “You Make Me Feel…”; the catchy, calculated hit is a bona fide jam for lonely partygoers looking for dance floor romance.

Although Night Shades is a meticulously orchestrated dance record, Cobra Starship have misplaced their unique tongue-in-cheek sensibilities; it feels like they’re killing time with safe, indistinguishable club tracks and pop ballads. Thanks to Auto-Tune and a recycled beat, it would be tough to identify “#1Nite” as a Cobra Starship song if it were played between any of the ubiquitous empty dance tunes heard in clubs. “Anything For Love” is a heavily synthesized nod to ’80s new wave, and is the best attempt Gabe Saporta & Co. have made at imitating A Flock Of Seagulls. Keytarist Victoria Asher makes her lead-vocal debut on “Disaster Boy,” and while it’s a valiant effort, her nasally tone is an acquired taste at best.

The pseudo-bubblegum-pop tune “Fool Like Me” places Saporta’s wit and humor on display, and it’s the most enjoyable moment on the album. The mild vulgarity and cute arrogance put to such an innocent melody is the brand of sass for which Cobra Starship are best known. Unfortunately, these traits are desperately lacking from the rest of Night Shades.