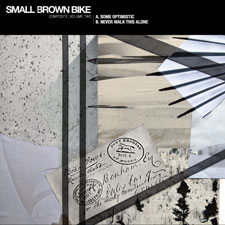 Small Brown Bike keep the creative juices flowing with their second post-reunion 7" of new jams. Composite, Volume 2 is another double-shot offering of the band's signature post-hardcore laced with worn emotions and charged atmospheres. But which signature, exactly? October 2009's Volume 1 was like a refinement of the gruff, upbeat sing-alongs of 2001's Dead Reckoning (think Polar Bear Club); Volume 2 is more the next logical step from the frigid cold and aching bones of 2003's The River Bed (think Balance And Composure)–the band's polarizing LP and final release before their 2004 breakup.

Consequently, this 7-inch might split picky fans. If you liked where the band was going with The River Bed, you'll immediately resonate with the powerful minor chords and layered, pained shouts the band commence "Some Optimistic" with. Otherwise, it might be hard to get through the song's constant stop-starts and linear foundation of chiming guitars. "Never Walk This Alone" traverses even more frostbitten territory, lumbering along its five minutes with Ben Reed's prowling, controlled bassline and his brother Mike's depressed guitar snarl.

Hopefully at least a portion of the Our Own Wars faction has grown to like the Bike's more progressive and earnestly morose side over the years, becauseVolume 2 provides a hell of an example of it. A very cold hell of an example, anyway.