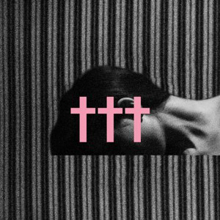 No one who has taken the time to listen to Deftones would ever suggest vocalist Chino Moreno is a man who likes to exist solely in one box. His main band’s catalog shows more ambition and experimentation than a hundred metalcore bands. He admirably explored more electronic-oriented territory with Team Sleep, and returns to that territory with Crosses (or †††, as they prefer), which predominantly favors computerized beats and synthetic sounds with a strong emphasis on atmosphere. A collaboration with Far guitarist Shaun Lopez and Scott Chuck, this is not the sound of friends screwing around in the studio but a collection of unique and moving songs reflecting the talents of those involved.

Brooding opener “†his Is A †rick” is drenched with darkness; Moreno croons away over droning synths and a skittering rhythm. When the chorus erupts, it does so with truly unexpected force, managing to be haunting and aggressive at the same time. The manner in which they blend various tones and moods in unconventional ways is indeed one of the strengths of the collection, and they do this no better than on “Op†ion,” which combines ethereal synths, a fuzzy, ugly, rolling riff and a widescreen chorus that sounds too big to be constrained by walls and a ceiling. The dark, low-key “Bermuda Locke†” and the understated, cinematic instrumental “†” are successful attempts at restraint; conversely, “†hholyghs†” boasts a grandiose, guitar-drenched chorus to die for. It is also the track that is perhaps most similar to Moreno’s work in Deftones, bringing to mind the likes of “Pink Maggit” and “Minerva” though having a haunting air and fluid energy wholly of its own.

With more songs apparently in the pipeline, †††’s first salvo is certainly one that whets the appetite with style and sophistication. The five tracks make it abundantly clear the band are a serious entity in their own right; what follows should be very interesting indeed.