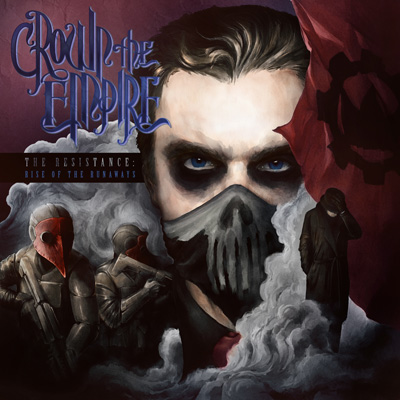 The Resistance: The Rise Of The Runaways

A young band’s second album is a big hurdle to clear. The music business cliché is that you’ve got your whole life to write your first album, and a year to write your second. Well, Dallas-based six-piece Crown The Empire have stepped up in a big way, with every aspect of The Resistance: Rise Of The Runaways coming across bigger, harder and just more than their full-length debut, 2012's The Fallout. Brandon Hoover and Benn Suede’s guitars rip and sear; Hayden Tree’s bass is a jangling, floor-shaking throb; Brent Taddie’s drumming is crisp and martial. Meanwhile, Andy Leo and David Escamilla’s vocals take modern-rock frontman-hood in thrilling directions, adding a non-cheesy theatricality that suits the album’s concept-album-ness perfectly. Don't let the words “concept album” scare you, either; it's no more complex story-wise than Black Veil Brides' Wretched And Divine: The Story Of The Wild Ones or My Chemical Romance's Danger Days: The True Lives Of The Fabulous Killjoys—and CTE's more arena-ready sound this time around definitely is indebted to both BVB and MCR. The songs themselves are dramatic and catchy in equal measure, with all the heaviness the pit demands when necessary, and capable of sweeping emotional power, too. “Metalcore” is officially too small a word to contain what Crown The Empire (along with a few other bands like Pierce The Veil and Blessthefall) are making.