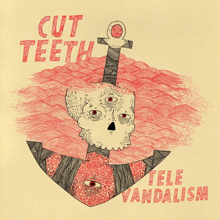 Few bands are as appropriately named as Chicago’s Cut Teeth. The tracks on the quartet’s debut EP, Televandalism, gnash and grind like the rear molars of a clenched jaw. The band’s members refined their power and precision in well-respected groups Red Knife Lottery and the Felix Culpa and apply the lessons learned to make Cut Teeth’s brand of post-hardcore particularly knotty. Televandalism is 20 minutes of forceful speak/scream vocals, steamrolling drums and guitars that don’t duel each other as much as tag-team the listener with elbow jabs in stereo. “Disappeared Like Dinosaurs” shows shades of early Q And Not U while opener “Who Is Thomas Driscoll?” is what Brand New’s Deja Entendu would sound like if the pop-punk elements were filtered out. “Desert Vines” could be the work of a heavier Braid—fitting, as the Felix Culpa previously served as Bob Nanna’s backing band. Cut Teeth may need to develop a few more tricks before their inevitable full-length follow-up, but Televandalism is both a relentless opening statement for the band and an indicator that they probably slay live.

“Blood Under The Bridge”