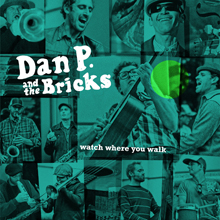 Dan P. And The Bricks

Watch Where You Walk

MU330 were never a household name, but they were one of the most important bands in the ’90s ska underground. Present day torchbearers like Big D And The Kids Table and Streetlight Manifesto may not exist without the St. Louis band’s self-proclaimed “psycho-ska” as a reference point. The mostly defunct group pop up now and then for scattered gigs and lead singer Dan Potthast has dropped a handful of below-the-radar solo records, but Watch Where You Walk from Dan P. And The Bricks is his first full band release since MU330’s Ultra Panic in 2002. Joined by former members of Slow Gherkin, Walk is Potthast’s most normal albumto date: It’s 12 tracks make no attempt at breaking any new ground, generally occupying that gray area between peppy reggae and the traditional ska of bands like Hepcat and the Toasters, with shades of dub (“Fan”). Its strongest offering is “Set Sail,” a long-needed reworking of the standout track from Potthast’s 1999 solo debut Eyeballs. Even if the frontman did not reach back into his archives, the combination of his voice with a horn section and a clean guitar strumming on the upstroke is enough for Dan P. And The Bricks to make former ska kids feel more than a little bit sentimental.

“Watch Where You Walk”