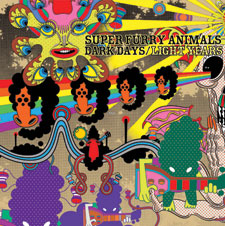 Whether recording entirely in Welsh or chewing celery and carrots with Sir Paul McCartney (who chomped percussively on 2001's Rings Around The World), Super Furry Animals have always been most effective when at their most adventurous. This makes Dark Days/Light Years a most welcome addition to the SFA canon, as it eliminates much of the musical conservatism (scruffy-but-straight-ahead pop; steel guitar-infused country-rock-lite) that marked recent releases. Instead, the album is a kaleidoscopic montage of stitched-together riffs and motorik propulsion, sometimes sprawling in execution (see the epic "Pric") but exhilarating in its reach and reckless abandon. What seals the deal is that the Furries' sense of humor hasn't gone anywhere, as the wonderfully titled "The Very Best Of Neil Diamond" (it isn't, quite) certainly attests.