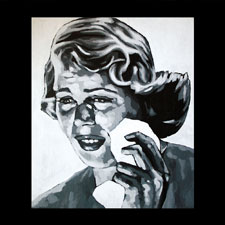 After shedding their art-grind style from 2003's debut Canada Songs and expanding into more avant-noise territory, Daughters have finally added the missing piece to their sound–a crushing low end. The drums and bass on their new, self-titled album create a punishing bedrock for the songs to set in, there's a semblance of melody in some parts, and when the band's trademark guitar stings pierce through Alexis Marshall's Danzig-esque howl, they're well paced and plotted. In a way, the songs on Daughters are much more conventional than on previous efforts, with consistent chord progressions and continuous riffs instead of needling guitar noises, and it's a welcome shift. "The Hit" and "The Theatre Goer" put Daughters closer in league to bands who are redefining metal and hardcore, like Hydra Head labelmates Big Business or Harvey Milk. But while that means they might be easier to digest, it also means that they're honing their songwriting skills, and it's hard to get double-bass pounding destruction out of your head when it's just so dang catchy.