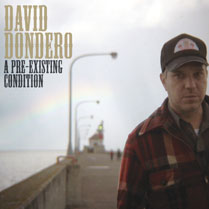 David Dondero (ex-Sunbrain/This Bike Is A Pipe Bomb) has tried something new with his ninth album, A Pre-Existing Condition. Not only is it his first entirely acoustic album, it also features a number of cover tunes, including his interpretations of songs by Little Feat, Charlie Pride, Neil Young, Woodie Guthrie, Bob Dylan, Jawbreaker, and others. Before we continue, yes… Jawbreaker. And, yes, it’s “Boxcar,” one of the best pop-punk songs of all-time. It’s daunting for an acoustic folk singer like Dondero to tackle one of Blake Schwarzenbach's crowning moments, but his version is sublime; it’s a mellow, understated take on a song we all thought could only be played larynx-out, all post-punked and blazing. The rest of A Pre-Existing Condition is just as impressive, from Dondero’s original compositions to his versions of the types of cover songs that lesser men would never dream to tackle. Dondero’s voice is endearing, kinda nerdy and bookish, but sweet and likeable. One original, “Not Everybody Loves Your Doggie Like You Do,” is the best pet song since the Weakerthans’ “Plea From A Cat Named Virtute,” funny and cute enough to send shivers down the spine.