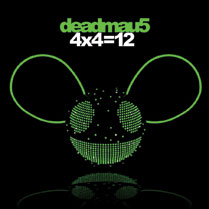 It’s easy to spot electronic music producer deadmau5, aka Joel Thomas Zimmerman; just look for the oversized, mouse-like head and ears he sports while performing. This gigantic cranium isn’t the most notable thing about deadmau5 these days, though. A half-decade into his career, Zimmerman has been nominated for a Grammy, performed at the Winter Olympics and earned awards for his DJing, remixing and production skills. 4×4=12, his third studio album, showcases the latter talent.

The collection is mostly instrumental tracks, ranging in style from insistent progressive house to watery techno (and just about every subgenre in between). Without vocals to provide structure, 4×4=12’s variety stems from deadmau5’s sense of dynamics and pacing, as well as his diverse sonic influences. Colorful zipper-synths zigzag through the MSTRKRFT-esque electropop twitch “Animal Rights.” “Right This Second” starts with eerie, arcade-game keyboard trills before giving way to galloping rhythms which multiply and clone themselves until the song bursts with syncopated friction. The slow-building “Some Chords” sounds like Justice on a diet, while the beats in the techno-drone “A City In Florida” crack like whips, as the song stomps forward with squealing urgency and paranoia.

These wordless tunes cement deadmau5’s ability to command a dance floor, although 4×4=12’s vocal-driven songs are more memorable. Scattered voices scat and chatter throughout highlight “Bad Selection,” which has the jittery, cut-and-paste feel of Basement Jaxx, while vocalist Sofia Toufa (aka SOFI) adds playground-bully rhymes and b-girl sass to the grimy dubstep lope “One Trick Pony” and to the more upbeat “Sofi Needs A Ladder.” (Choice spitfire lyric on the latter: “You left a bad taste in my mouth, my sour patch kid.”)

These vocal-driven tracks don’t sound out of place on 4×4=12, which bodes well for deadmau5’s chances for mainstream domination. Although his work is right up the alley of fans of DJ and dance music, clearly he has the potential to cross over to a pop audience. But as this album proves, he’s more than on his way.