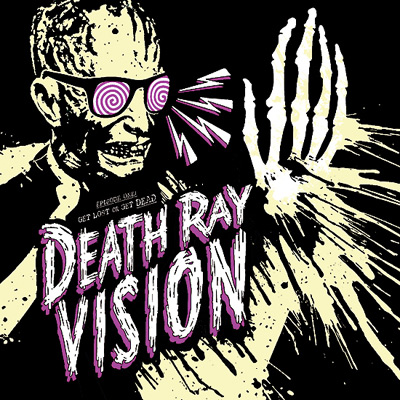 Get Lost Or Get Dead EP

Originally united in Overcast, Death Ray Vision vocalist Brian Fair (Shadows Fall) and bassist Mike D’Antonio (Killswitch Engage) have gone onto bigger and better things. With Get Lost Of Get Dead, they return to their roots. There’s no high concept; this is five tracks of thrash-flavored hardcore, or perhaps hardcore-flavored thrash. While this is not a million miles removed from Shadows Fall’s output, and Fair’s voice will of course invite comparisons, anyone hoping for echoes of Killswitch will be disappointed.

With buzzsaw riffs and galloping rhythms they keep things blunt, to the point, and rooted in the 1980s heyday of sleeveless denim jackets. Only on rather dull instrumental “Chainsaw Of Bees” do they take their collective foot off the gas, and the whole thing is over and done in under 15 minutes. The title track is far and away the strongest, its energy and swinging grooves gripping, as is its fist-in-the-air chorus.

The other tracks are fine; the quintet nail the sound they’re going for, and fans of S.O.D,, Municipal Waste or Nuclear Assault may display demented grins as they make this the soundtrack to windmilling their hair all the way to the chiropractor’s office. The snag is that for anyone else, this just isn’t essential listening. There have been plenty of bands doing virtually the same thing for a few decades now, and while this is fun in a throwaway fashion, it lacks the personality and fire to inspire repeated listens.

“Get Lost Or Get Dead”