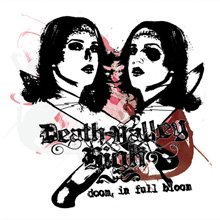 The debut album by this California-based quartet is a high-energy blast of post-punk-meets-modern rock, like a particularly edgy Queens Of The Stone Age album with a few stolen At The Drive-In moves thrown in, and the occasional high-pitched, Wolfmother-ish howl. There’s a slightly noised-up version of Katy Perry’s “I Kissed A Girl” tacked onto the end, for those who still feel like ironic pop appropriation is amusing and/or a worthwhile aesthetic strategy, but the 12 tracks before that exhibit more imagination and style than the presence of one wretched novelty cover would indicate. The guitars on tracks such as “Thru Hell,” “Multiply” and “Bring It Down” have some real bite, and the drums are loud and driving. Indeed, “Multiply” is a nearly perfectly crafted modern-rock radio single—you could play it in between a song by Foo Fighters and one by Deftones, and not a single listener would blink. Other songs are a little harsher, or a little prettier, but it’s always a matter of degree. Death Valley High have a good name and a ready-for-the-big-leagues sound. Despite its title and artwork, Doom, In Full Bloom is a great summer album, so don’t be surprised if they’re omnipresent a year from now.