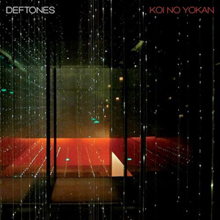 This review originally ran in AP 293.

“Swerve City,” the opening track on Deftones' seventh album, is a fine distillation of the band’s essence, where vocalist Chino Moreno’s idiosyncratic pillow-talk approach to melody is buttressed by Stephen Carpenter’s alternating majestic/ugly riffing. Like much of Koi No Yokam, the song is essentially an aural business card, representing the band’s raison d’etre for the past 24 years. If other bands did this, we’d accuse them of pathological laurel-resting; on their new album, it feels like Deftones are enjoying their chemistry and working on an instinctual level. Most of the album’s curious moments come from DJ/synth op Frank Delgado’s sense of the appropriate, from weird orchestral droning (“Tempest”) to textural wind tunnels (“Gauze”). Carpenter occasionally delivers some downright pretty lyrical figures (“Rosemary”) before going back to ramping things up mightily. All of these elements come to great fruition on the closing Pinback-y track, “What Happened To You?”

No one can deny that Deftones have made significant in-roads in helping inform both alt-rock/underground and metal music scenes. They have significantly raised the bar to inform both tribes of a higher consciousness of possibilities. While Koi No Yokam can’t honestly be described, like some dudes say, as “some serious next-level shit,” it does serve as an excellent point of entry for a new generation of fans, while reminding the complacent rest of us how the character of Sacramento’s finest continues to endure.