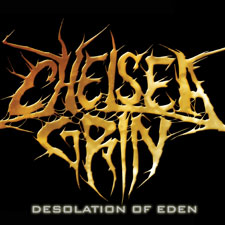 Salt Lake City-based six-piece Chelsea Grin have all the deathcore basics down. The galloping, triggered double-bass drums; the pinched squeals of guitar at the end of downtuned riffs; the ultra-low breakdowns; the vocals that alternate gut-churning growls with witchy screeches. That's all superficial, though. What's important is what's uniquely theirs, and that's the feeling of ominous suspense that underpins songs like "False Sense Of Sanity" and the album's title track. The rhythms aren't so much blast beats as tribal throbs, and the riffs come in slow like bombers above an unsuspecting city pre-dawn. The guitar solos aren't spurts of fretboard overstimulation; they're almost the opposite, slow-burning interludes of relative peace not unlike those played by Meshuggah's Fredrik Thordendal (minus the brain-crushing technicality, of course). This is an assured debut by six youngsters with bright futures