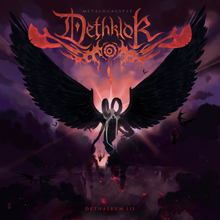 Brendon Small, creator of the Adult Swim cartoon series Metalocalypse, which chronicles the adventures of fictional extreme metal band Dethklok, is a better than decent guitarist, and a serviceable if uninspired vocalist. He knows enough to hire seriously talented players—bassist Bryan Beller and drummer Gene Hoglan—to back him on these albums of songs supposedly by the band, too. So from a musical standpoint, each of the Dethalbums offers competently played melodic death-metal songs with fierce blast beats, grinding guitar riffs and guttural growls. But other than “I Ejaculate Fire,” the lyrics aren’t that funny—it often seems like Small is trying to write real metal songs. And it’s hard to see the point of that. There are tons of straight-up death-metal bands much better than Dethklok, and frankly, even if that wasn’t true, one album of songs by a fictional band is plenty; an internet-only EP would probably have sufficed. Three albums is stretching the joke well beyond any reasonable limit.