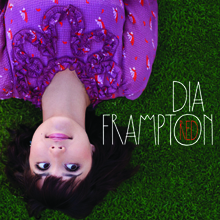 Dia Frampton received an unexpected career boost after appearing on singing-competition show The Voice over the summer. Although she and sister Meg are still plugging along under the moniker Meg & Dia—they even self-released an album, Cocoon, earlier this year—the TV show put the 24-year-old in front of a much bigger (and more mainstream) audience.

But Frampton’s solo debut, Red, isn’t your typical mainstream pop album, especially lyrically. The folksy, banjo-laden “Isabella” is a note of support to her younger sister, who was dealing with a rough time in their parents’ marriage; “Good Boy,” as Frampton told AP in her recent track by track, is about a close friend of hers who was molested as a child; and “Walk Away” details a woman taking revenge on her abusers. The latter tune in particular is deceptively cheery, what with its jaunty whistling, church bell peals and easygoing guitar riffage.

Frampton collaborated with multiple songwriters on Red, including members of Foster The People and Florence + The Machine (and on a bonus track, Meg Frampton); as a result, the album is certainly polished. But while too many co-writers are often detrimental to an album, Red is pleasingly diverse—and more often stays true to the homespun, creative vibe of Frampton’s previous releases. Highlight “Daniel” is a moving acoustic number lamenting the breakup of a relationship, while “Billy The Kid” is a wicked-cool synth-pop freeze and “Don’t Kick The Chair” is an homage to early-’80s Madonna (albeit with a modern jolt: Rapper Kid Cudi drops in for an uplifting verse or two).

In fact, Red’s weakest spot is its stab at crossover chart success: “I Will” features dramatic piano, goopy strings and vocal contributions from country star (and Frampton’s coach on The Voice), Blake Shelton. The song sticks out like a sore thumb among all the other, more introspective tracks, simply because it feels so calibrated for maximum radio airplay. Then again, the music industry has always seemed to push Dia Frampton in an overproduced direction (see Meg & Dia’s last major-label album, Here, Here And Here), even though her stripped-down, honest music resonated more with people. Thankfully, there’s enough of the latter on Red to satiate fans—and perhaps continue to win her new ones, as well.