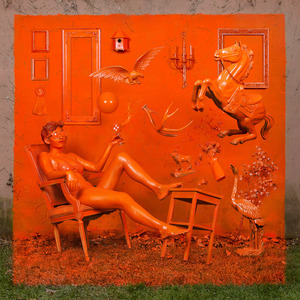 Three EPs into their short career, Diamond Youth continue to perfect their blend of dreamy pop and alternative rock that's reminiscent of Weezer and Jimmy Eat World. With the help of producer Brian McTernan (Circa Survive, Hot Water Music) and the members' collective approach to songwriting, the six tracks on Orange are both an homage to the mid-'90s and a stellar example of what this young band have to offer the sometimes stagnant alternative rock genre.

Orange opens with “Cannonball,” three minutes of fuzzed-out guitars, staccato drumbeats and frontman Justin Gilman's reverie-inducing vocals. The song is practically guaranteed to have listeners snapping their fingers and nodding along in 30 seconds or less. “Separator” finds the band kicking up the pace and sees Gilman doing his best to channel Jim Adkins. Things slow way down with “Come Down,” which despite its subdued tone, will have you thinking about ocean waves and the Beach Boys before shaking you out of your daydream midway through the song with a tempo change.

While most of the songs lean toward the pop side on the alt-rock/pop scale, the title track is two minutes of charging, cymbal-crashing rock ’n’ roll which reminds listeners not to get too comfortable. (It also serves as a reminder that guitarist Sam Trapkin earned his musical stripes in Trapped Under Ice.) The low point is the slightly repetitive “Swinging From You,” but fortunately, things ends on a high with “Lola,” a song that sums up everything Diamond Youth do well, from ’90s-inspired melodies to wistful vocal harmonies. Now, if only they'd release a full-length…