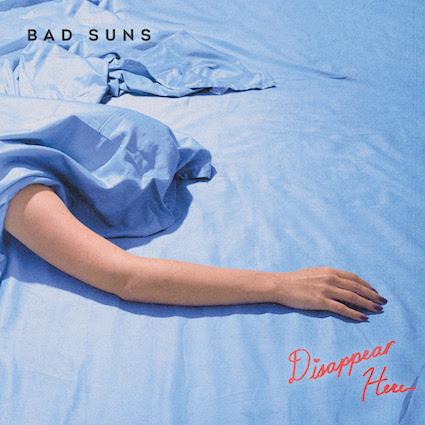 After a thunderous two years following the release of their first EP, Transpose, and their debut, Language & Perspective, Bad Suns’ newest effort, Disappear Here, aims to quell all concerns of a sophomore slump in the form of their most dynamic and introspective work yet.  This is no easy feat: Having to follow monumental singles from their debut, like “Cardiac Arrest” and “Salt” (both of which garnered the attention of late night television and massive radio play), Bad Suns gave themselves quite the mountain to climb.Fortunately, much of Disappear Here  rises to the challenge.

On the heels of a lengthy arena tour supporting electro-pop singer/songwriter Halsey, Bad Suns first broke the news of this record with the release of its title track, “Disappear Here.” The track opens the record with a reassuring blend of post-punk melodies and ’80s new wave guitar work, all masterfully crafted through a modern pop lens with the help of longtime producer Eric Palmquist. From this strong, upbeat beginning, the record dips into an intentional lull of more experimental jams with new readings of synthesizers and guitar effects reminiscent of British-born New Romantic acts such as Duran Duran and Depeche Mode.

Supplementary to the musical progression, the record’s lyrics touch on more introspection than ever before. Vocalist Christo Bowman delivers a harsh self-analysis filtered through catchy, repeated hooks in songs such as “Even In My Dreams, I Can’t Win,” “Maybe We’re Meant To Be Alone,” and “How Am I Not Myself.” Longtime Suns fans will welcome a resurrected version of  “Defeated,” originally released in 2010. (https://soundcloud.com/beforebigszach/blackout-101-defeated). This new and improved version includes a majority of the original’s lyrics, with a more mature use of backing vocals and refrains.

With such an overwhelming response to their debut, Disappear Here serves as an indicator to both the band’s longevity and overall direction. As Bad Suns prepare to embark on another full U.S. headlining tour this October, Disappear Here will surely prove that Bad Suns are  merely getting started in their quest for world domination.