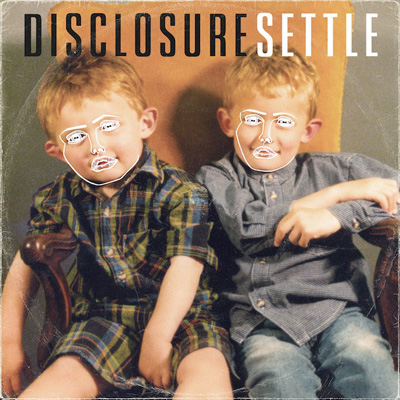 Electronic dance music producers looking to late-'80s/early-'90s house music-inspired club sounds as a template for new material was perhaps an inevitable move. We are now in full retro sway, 20 years removed from the chart successes of Black Box, Deee-Lite and Snap! after all. The real surprise is how much inspiration they were able to harvest from within the same sleek synth tones and steady beats of their predecessors. The folks who are culling the most reverent yet modern take on this sounds is the duo known as Disclosure. When the baby-faced brothers behind this project released their first single in 2010, it was cut from the same future-garage cloth as many of their contemporaries. But with each successive release, Guy and Howard Lawrence have been wading further into the neon-tinged waters of house. And the resulting singles, many of which make up their debut album Settle, are the kind of bangers guaranteed to fill up a dance floor but quick.

Like the above vintage producers and artists, what makes the tracks on Settle absolutely skyrocket is through the brothers' choice of vocal collaborators. They aren't household names—unless you are a collector of 12-inch singles from tiny U.K. dance labels—but they add so much soulfulness and iridescence to the whole album. Sam Smith, an R&B songwriter on the rise in England, coos his way through the verse of “Latch” while the 4/4 beat, run-out-groove static and pinging synth noise start building to an expected crescendo. Instead, Smith sends his falsetto to the stratosphere while the music almost disappears in a glorious free fall. Jessie Ware, on the other hand, relies on a delicate coo through the alluring “Confess To Me,” trading off lines with one of the Lawrence boys while a swirl of nodding rhythms flow between them. Indie-pop group London Grammar have their overly earnest approach shifted towards better ends on the Pet Shop Boys-like “Help Me Lose My Mind.”

Settle is a rare animal: an EDM album that actually flows like an album should. Listening to it, there's a feeling that as much thought went into the track sequencing as went into the sequenced rhythms. Not that all the songs necessarily work as well as the rest (“Second Chance” is a particularly clunky bit of Burial lite), but they come along right when you need a moment's pause before the next anthem arrives to send you back into the groove.