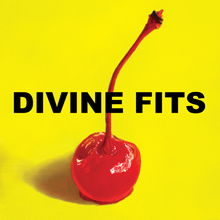 It’s unsurprising that two scratchy-voiced dudes like Britt Daniel and Dan Boeckner, who both like fussing with effects pedals and emotional tension, can coexist. But listening to Divine Fits debut album, A Thing Called Divine Fits, seems like exactly the sum of the abilities of the frontmen for indie-with-a-scoop-of-soul rockers Spoon and recently broken up indie darkwave revivalists Handsome Furs—nothing more, nothing less. For what it’s worth, New Bomb Turks drummer Sam Brown is keeping time for this outfit, but his role feels like a distant third.

This is familiar ground. “For Your Heart” plays out like another moody Furs moment, which is always a keyboard preset or three away from Boeckner’s more rock-oriented Wolf Parade contributions anyhow. “Shivers” catches Daniel in a mid-tempo tangle with romance that could very well be a remnant from Transference. Thus, the Boeckner-sung “Civilian Stripes,” which brings together a piano and a soft tap of the tambourine that Daniel’s used countless times, and the Daniel-led “Would That Not Be Nice” glimmering with a Furs-ier synthesizer sheen, stand out as a unique moments.

Even if it’s exactly what devotees might expect, A Thing Called Divine Fits is still catchy. Call it two EPs of material from two gifted frontmen combined into one LP—nothing more, nothing less.

“Would That Not Be Nice”