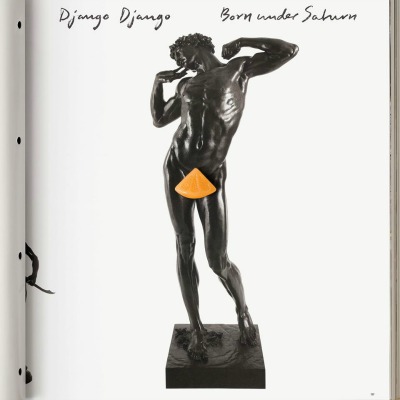 Nearly every song on Django Django’s sophomore release, Born Under Saturn, has a moment that will turn heads, some in ways the band probably didn’t intend. There’s a few missed chances here, ideas that are abandoned just when they get interesting.

Often, these moments come towards the end of tracks. Take album opener “Giant,”, which starts with a brief, confident piano riff that forms the base of the song. Singer Vincent Neff joins in with a melody that checks off all the boxes on the psychedelic influence membership application, with more and more instrumentation jumping into the fray. It is, with little more than a minute left, when all of these pieces come together as Neff’s urgency increases and the piano becomes as high in the mix as his vocals, that the song touches something special—before ending. Right as things get interesting, the band is on to the next idea.

To Django Django’s credit, Born Under Saturn is crammed full of novel ideas and sounds. “Shake And Tremble” recalls “Life’s A Beach” from their self-titled album, and the surf-rock stomper is short-list contender for 2015’s summer jam. “First Light” is also successful, due in part to unabashedly rocking a Beach Boys’ melody over stammering synths. There’s an album’s worth of ideas in this Brian Wilson-owning-the-dance-floor stunner, because Django Django aren’t interested in one overarching sound, but rather how many different genres they can dip into. They jump away from the sunny sounds on “Found You,” which flashes some Madchester influence along with synths that could soundtrack a nightmarish amusement park.

Other attempts to get fans shimmy sputter, which is worsened by the fact that the two weakest songs, “Pause Repeat” and “Reflections,” follow one another, making for a lackluster middle portion of the album. “Reflections,” in particular, is a misstep, with a clunky piano part that at first blush sounds like a preprogrammed Casio loop. It gets worse when the ’80s saxophone kicks in, sounding like a forgotten cop show theme song. The last 30 seconds introduce an escalating synth that only helps illustrate the band’s tendency to cram too much into their songs.

Refreshingly, Django Django seem to develop a more selective ear on the backend and rein it in somewhat. “Beginning To Fade” is a lovely little waltz on a forlorn piano—well “little” by Django Django standards. Some bands would strip it down further, creating a “sensitive” song for the end of the record, but Django Django smartly cut back just enough to produce a more down tempo track that still bears their hallmarks. “Life We Know” ends the album on a strong note, managing to be both driving and breezy. The guitar dances around the methodical base and the song reaches that psychedelic-pop perfection that Django Django , at their best, are known for.

Born Under Saturn is an album of ambition, and while the gaffes certainly hold it back, there are enough good ideas crammed in throughout, making the album a worthy trip to a spacey dancehall.