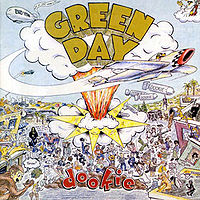 There’s a collective thought that once a band sign a major label contract, they take the money and run, letting their major label debut fall flat among high production values and A&R men searching for the single. With Dookie, Green Day seem to attack that myth with a vengeance. From the opening drum fill on “Burnout,” the band rip into a fierce slacker anthem attempting to capture the zeitgeist of 1994, complete with a huge, polished production value without abandoning their scrappy, loose punk playing. The rest of the album follows suit. Straying from the strict ’70s punk formula, the band adapt Mike Dirnt’s iconic walking bassline for “Longview” into a heavily swung rocker, nail spot-on backing harmonies for the pop ballad “Pulling Teeth” and take on slower tempos for a broader ’90s alterna–rock sound on “When I Come Around.” But the key tracks are a re-recorded version of “Welcome To Paradise,” which showcases the band’s full maturation. In keeping with the energy of the Kerplunk version, Green Day’s new attack has the band ripping every fill, pushing the tempo and adding an emotional heft to the lyrics by killing the song with confidence. Fans of the band’s simple pop-punk can’t deny the progress Green Day made with their songwriting, or the boon to their sound that proper production values lends. Nary a song has a misstep, and capping the album with the acoustic-opened “F.O.D.” gives a sense of gravitas to songs that have surpassed simple broken hearts and teenage angst. The band’s self-awareness and critical eye produced a killer album, and left the future wide open.