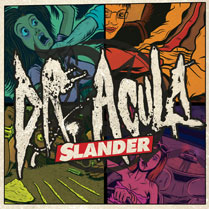 Long Island sextet Dr. Acula have come a long way since the “party grind” of Below Me and The Social Event Of The Century. Their music is slower and heavier now, moving into the chest-beating deathcore territory of Emmure, the Acacia Strain and Chelsea Grin. The movie and TV dialogue samples that have riddled all their releases are still there, of course, spicing things up and adding an additional layer of satirical bite—as though an album with a song called “Cocaine Avalanche” needs more jokes. It doesn’t, not when it’s got riffs this potent. Slander is more than just a parade of sludgy breakdowns—the party synths add some texture, but so do the occasional bursts of pop-punk and even melodic death-metal riffage on tracks like “Pure And Immature Goon” and “Who You Gonna Call?!” There’s a passage toward the end of the latter track that could have come from a Black Dahlia Murder album. With Slander, Dr. Acula have grown from a joke band into a group worth attention and respect, without losing their sense of humor.