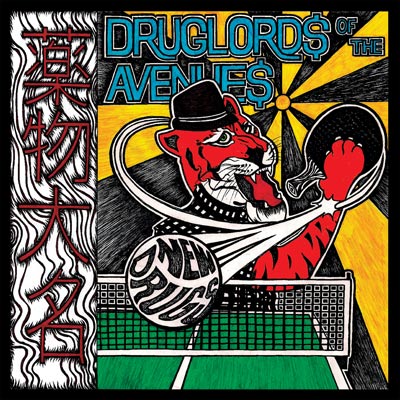 Druglords Of The Avenues

When Swingin’ Utters first started cranking out records in the early ’90s, they were the kind of band you could imagine running across in some crappy warehouse or punk-rock pub. But soon after, that, Fat Wreck Chords record deals, high-profile tours and a shift toward roof-raising anthems jumped the Utters to a bigger stage. Druglords Of The Avenues are a long-running side project of Utters frontman Johnny Peebucks—and although their second album, New Drugs, departs slightly from the Utters’ ’77 orthodoxy, it doesn’t sit still long enough to notice. The lack of purity—or too much preconception—helps New Drugs rise to the occasion. Like the results of a beer-fueled, weekend jam session at the practice space, songs like “Brandy Breath” and “Such A Bore” channel the anthemics of ’90s pop-punk while incorporating a lick of twang to keep things lively. The generic, hookless hardcore of “This Is A Pig” doesn’t bring up the average, nor does “Don’t Mind Me,” a middling punk-reggae track that’s about as compelling as a Tim Armstrong solo song. But when Peebucks namechecks his Pogues-fronting hero in “MacGowan’s Seeth”—or when guitarist Matt Grayson perhaps unwittingly yanks a riff from Buzzcocks' “Sitting Around At Home” on “For My Life”—New Drugs achieves liftoff. Then again, those two songs also sound the most like the Utters; the hyperactive, lo-fi jangle “Might We Dance” is where Druglords sounds most removed from their source material. (It's also the most compelling song on the album.) New Drugs doesn’t have the spit-shined consistency of the Utters’ latter-day output, but its scattershot, knuckle-dusting fun captures the Peebucks spunk of old.