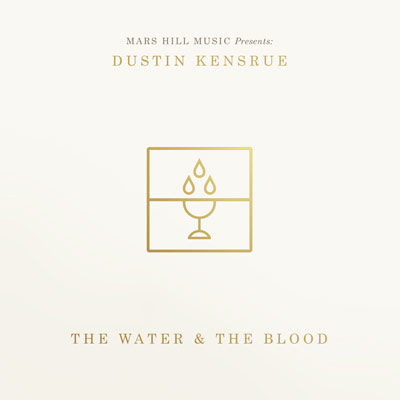 The Water & The Blood

Since Thrice went on hiatus last year, frontman Dustin Kensrue hasn’t had to worry all that much about impressing label executives or self-serving critics. Instead, his third solo album, The Water & The Blood, was created entirely to please a power far higher than even the top executives at Island Def Jam. Kensrue is now a worship pastor at the innovative Mars Hill Church in Bellevue, Washington, and the gravelly voice of Thrice is now a gravelly voice for God. As such, The Water & The Blood was never meant to be an album one sits back and critiques. It’s a praise album openly meant for worshippers to sing along to—which is instantly apparent from the album opener, “Rejoice” through anthems like “God Is Good” and “Come Lord Jesus.”

It’s a strange listen for secular Thrice fans, especially those who weren’t first baptized into Kensrue’s theology through his other Mars Hill project, the Modern Post. It’s strange because although the lyrics could be cloying to many non-Christians (“Jesus, you have taken hold of me/And in your grip of grace, I’m finally free” is a pretty quintessential line), a lot of the melodies and music on The Water & The Blood are at times a little amazing—especially if you wished 2007’s Please Come Home had fewer acoustic moments and more experimental Thrice elements. Lyrics aside, “The Voice Of The Lord” and its distorted layering would fit neatly onto Vheissu while “It’s Not Enough” was actually written for Thrice. In fact, one potentially unexpected side effect of just how often this album evokes Kensrue’s previous band is that it makes you suddenly question which of your favorite Thrice songs were openly religious all along (give an open-minded listen to “Come All You Weary” and “Like Moths To Flame”).

Still, you can’t compare The Water & The Blood to anything else Kensrue has done. You can only really compare it to the likes of Christian stalwarts like Newsboys or Casting Crowns and from that angle, Kensrue has created an album that deserves right beside them. You also can’t help but notice the unfettered passion he exudes throughout the album—it’s good to see the guy happy. But you can’t hold the subject matter against him, no matter your beliefs. This album was made for people who share Kensrue’s views, not for those looking to denigrate them. With all of that aside, The Water & The Blood is the closest thing to new Thrice any of us will be graced with for the foreseeable future, and if this is what church sounds like these days, Kensrue could beckon a whole new audience to his services—and that’s entirely why the album came to be.