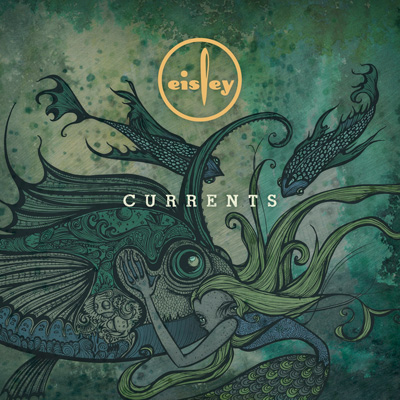 Now that Eisley are free from major-label woes and have their own home studio to record in, it seems that their musical focus has sharpened up for the better. Currents comes just two years after 2011's The Valley (itself taking four after 2007's Combinations), and though Eisley have always dropped EPs full of delight and promise in between album cycles, their fourth album showcases marked progression for the familial quintet.

Make no mistake: Eisley are still crafting atmospheric, enchanting indie pop that tactfully avoids even approaching the brink of overly sick sweetness. But Currents impressively skews towards something bolder and unlike much of what they've done in the past, tastefully stacking layers of guitars, keys and even strings or handclaps here and there. The newness is evident right away, as the opening title track bounces with prickly guitars, darker shading and esoteric, adventurous range in vocal pitch, like something out of Blonde Redhead's playbook. And even when the band's signature whimsy edges back in, they're looking forward creatively, whether that be chopping and cutting up wordless vocal enunciations (“Blue Fish”), grooving through basslines Ed Breckenridge might've slapped on one of Thrice's final records (“Save My Soul”), or juxtaposing some of the album's most memorable hooks against a deliberate, restrained chorus (“Real World”).

Currents does suffer a bit from the band's usual tendency of letting things wander a little too far astray: As the Merriment-accompanied “Wicked Child” professes, their head can occasionally be in the clouds, letting a song jam out longer than it needs to or not injecting enough emotion into given moments. At nearly 51 minutes, Currents doesn't exactly feel overstuffed, but the band fall short on interesting ideas to keep it a totally captivating run for the entire time, notably during the defanged third-quarter. (Thankfully, “Lost Enemies” and the dark, folky “The Night Comes” pick things back up for a strong near-finish, the latter reminiscent of Anthony Green's “Slowing Down (Long Time Coming).”) All told, this is hardly a bad addition to Eisley's burgeoning catalog—their development is obvious, and there are enough quality songs present to improve that theoretical “greatest hits” collection for their live show.