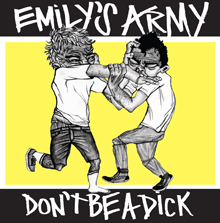 Don’t Be A Dick

If there’s ever a band who needed to be prepared to catch major shit upon their proclamation to the punk world, it’s Emily’s Army. Produced and released by Billie Joe Armstrong (yeah, him), and featuring four teenagers ranging from 15 to 17 years old—one of which just happens to be the son of Mr. Green Day himself—the upstart Easy Bay pop-punk group have some pretty big Chuck Taylors to fill. Now, the band’s uncanny resemblance to Green Day will also raise some pierced eyebrows; although Billie Joe’s brethren, Joey, is actually just the drummer and brothers Max and Cole Becker handle songwriting and vocal duties on the album. Don’t Be A Dick is overwhelmingly tight and poppy; quite impressive for the young pups they are, and shockingly similar to the early work of (here we go again) Green Day, and their pre-name change incarnation of Sweet Children.

Tracks such as “Asslete,” “Broadcast This” and “Statutory Brainrape” (yeah, even the song titles sound like Green Day) are tight, catchy and perfectly harmonized. When considering that these songs were written by kids barely in high school, it’s a bit of a jaw-dropper. Even the mid-paced quasi-ballad “Burn Apollo” is handled with poise and the right amount of endearment. The only real clunker is “Ho-lloween,” an ode to the disturbing trend of skanky Halloween costumes, which sounds like the Misfits meets Old Skull (sorry, the Old Skull reference was gonna show up somewhere in this review). This one is a fail. The rest of the album, however, is pretty solid.