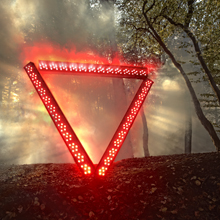 A Flash Flood Of Colour

This review originally ran in AP 283.

A funny thing happened between the release of Enter Shikari’s 2009 full-length, Common Dreads, and now—and that thing is called Skrillex. Suddenly, dubstep was no longer Europe’s dirty little secret, and dozens of bands on the left-hand side of the pond began incorporating riskier electronic elements into their otherwise rather vanilla rock and metal arrangements. Where did this leave the four boys from St. Albans, Hertfordshire, U.K., who were inarguably one of the first modern groups to succeed at this mixing of genres? Well, if you thought A Flash Flood Of Colour would be anything less than a defining statement of the band’s career, you must be too busy anticipating the next bass drop.

It’s hard to tell just who is pushing whom on Colour. On one hand, the musical arrangements bounce between being positively breathtaking (“Constellations”) and skull-crushing (“Sssnakepit,” “…Meltdown”). That the band are able to fuse together so many elements of electronic, dance, industrial, rave and dubstep music into their post-hardcore songs and make it sound so effortless is incredible. But what makes the songs truly exciting are the lyrics from frontman Roughton “Rou” Reynolds. The 25-year-old has a better grasp on world politics and socio-environmental issues than most people twice his age. “Arguing With Thermometers” takes on the topics of global warming and the modern world’s dependence on (and endless pursuit of) oil. “Stalemate” takes to task those who send countries to war (“Today’s wars make trillionaires out of billionaires/Tomorrow’s wars will fuel generations of hate,” Reynolds croons over a delicate acoustic guitar). “Gandhi Mate, Gandhi” is an absolutely brutal four-and-a-half-minute monologue from Reynolds as he his bandmates rant with equal amounts eloquence and anger about how today’s political system is broken beyond repair (“See, if we keep them silent/Then they’ll resort to violence/And that’s how you criminalize change,” bassist Chris Batten sings from the perspective of someone in power). Considering the attempts by police forces to bait U.S. Occupy protestors into physical engagement, this track’s message hits awfully close to home.

And that’s really the whole point of A Flash Flood Of Colour—it’s a musically adventurous (and surprisingly catchy) album, but the real reason to listen to it is to let Reynolds stimulate your senses beyond the mosh pit. Enter Shikari are well aware that due to the current musical climate, they are being held in high regard as innovators of heavy music by bands and fans alike. The worst thing they could do with that power is crank out a dozen faceless tracks loaded with breakdowns and empty sing-along parts. In short, fuck that: Being in a band is an inherently selfish idea—it assumes that what you have to say somehow matters in the grand scheme of things—but with A Flash Flood Of Colour, Enter Shikari prove that they have something substantial to say and a creative way of saying it. You’d be foolish not to pay attention.