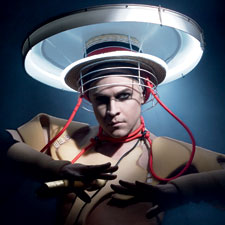 "In a modern world/ it's hard to be heard," Casey Spooner, one half of electro duo Fischerspooner with Warren Fischer, sings on "In a Modern World." He's talking about the evolving relationship between communication and technology, but juxtaposed with his band, the phrase is striking: For more than a decade, Fischerspooner have deftly combined nuanced, layered electronic soundscapes with urgent vocals in way that doesn't sound manufactured or overly produced, unlike followers MSTRKRFT and Justice. "Infidels Of The World Unite," a logical successor to many of the songs on 2005's Odyssey, is dancey and compelling, sounding like a smoothed-out version of the Faint, while computerized instrumentals become orchestral on the epic "Money Can't Dance." However modern our world, Fischerspooner continue to give us a reason to listen.