Along with the giveaway, learn why the guitar is best suited for punk rock.

There is no doubt that Green Day leader Billie Joe Armstrong is a great guitarist, punk rock or not. He gets great tone and comes up with solid, catchy riffs and tight, tuneful leads. His most iconic guitar is “Blue,” the heavily stickered Fernandes Stratocaster copy his mother bought him for his 11th birthday. It was used on every one of the band’s albums and tours until the turn of the century and still gets strapped on in concert for such early tracks as “Basket Case” or “2000 Light Years Away.” But the guitar he’s come to be identified with in the 2000s is the simple rock ‘n’ roll beast known as the Gibson Les Paul Junior.

Now Epiphone, long the more economical wing of Gibson guitars, has made available a professional-grade replica of “Whitey,” one of Armstrong’s most recognizable Juniors, at an affordable price.

Read more: These punk records from 2000 led the genre into a brand-new century

The Gibson Les Paul Junior was introduced in 1954, as a budget version of their top-of-the-line Les Paul model. Introduced in 1952, the Gibson Les Paul was one of the first commercially produced solid-body electric guitars, named for the famed jazz guitarist who was one of the pioneers of the solid-body electric, alongside Leo Fender. It took the basic slab mahogany body of the single-cutaway Les Paul and excised the maple cap that adds weight, sustain and note articulation. The instrument was as bare-bones an electric guitar as you could buy — a single “dogear” P-90 pickup and one volume and tone control apiece, plus a wraparound stopbar bridge/tailpiece unit. It was aimed at students and beginners.

Eventually, Gibson gave it what was known as the “TV yellow” finish, supposedly because it photographed better on black-and-white television broadcasts. The manufacturers also offered a two-pickup version, called the Les Paul Special. Then in 1958, the design changed to a double-cutaway body, likely in competition with Fender’s popular Stratocaster. The double-cut design remained until Gibson discontinued the Junior in 1963.

A funny thing happened in the 1970s. A new breed of rock ‘n’ roll guitar players rediscovered the Les Paul Junior. The guitars were frequently as cheap as $50 in pawn shops. When cranked through the new breed of high gain tube amps such as Marshall or Orange? They were rock ‘n’ roll machines! The fat P-90 screwed directly into the Junior’s slab mahogany body cuts through all that distortion with just the right amount of clarity, plus enough midrange to leap out of any sound mix. Those players? We’re talking about Mountain’s Leslie West, the Rolling Stones’ Keith Richards and Luther Grosvenor (aka “Ariel Bender”) of Spooky Tooth/Mott The Hoople. (Grosvenor’s Mott predecessor, future Bad Company guitarist Mick Ralphs, also liked Juniors.)

But no one was more identified with the Gibson Les Paul Junior than Johnny Thunders. Through the New York Dolls, into the Heartbreakers and into his solo career, Thunders wielded his battered double-cut ‘58 TV model like the most musical chainsaw in the world. His immaculate raunch and choice of instrument proved highly influential on punk guitarists forevermore, especially on the U.K. scene’s first wave. The Clash’s Mick Jones, Marco Pirroni of Adam And The Ants, Guy Days of 999 and Buzzcocks’ Steve Diggle all followed Thunders’ example and at least began with a Les Paul Junior, even if some might have eventually moved on to the pricier Les Paul when record company advances allowed.

So of course, Armstrong — always a student of rock ‘n’ roll history — would eventually discover the magic inherent in a Les Paul Junior. It is the ultimate punk-rock guitar — basic, stripped-down, raw and it looks cool as fuck hanging below the belt. He owns and plays several. But he always returns to his first one, “Whitey,” purchased and used during the Warning sessions. It was the basis for Gibson’s first signature Billie Joe Armstrong Les Paul Junior model. Hence, it’s a natural prototype for Epiphone’s first Billie Joe Armstrong Les Paul Junior guitar.

So, what about that guitar?

Speaking as a punk musician myself (when I am not scribbling articles for Alternative Press), I have laid my hands on a few Les Paul Juniors over the years. It is my favorite electric guitar, my preferred weapon, especially due to Thunders’ legacy. Epiphone’s take on the Les Paul Junior is impressive, Armstrong’s name scribbled on the back of the headstock or not. It may be the best Junior I’ve ever played. 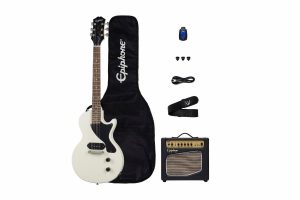 Pulling the custom, faux leopard fur-lined hardshell case with its silkscreened Warning logo from the shipping carton, the quality and care undertaken was immediately impressive. Opening the case, the whiff of fresh nitrocellulose lacquer familiar to anyone who bought a few upper-end guitars filled the air. Considering “Whitey” is likely a mid-’50s model, this is an excellent sign. And that glossy Classic White finish — contrasted with the black pickguard, pickup covers and knobs — looks like you’re walking onstage in a white tux with a black tie and shoes. You’re gonna look sharp!

Read more: Revisit ‘Nimrod’: the moment Green Day ripped up their own rulebook

It’s a nice thick slab of mahogany in the single-cutaway shape, with a nice meaty ‘50s neck glued in. Those ‘50s neck profiles are substantial without feeling like a baseball bat. It sits in your hand comfortably, and it allows easy fretting of the root note of barre chords with your thumb on the low E string, a favored trick of Jimi Hendrix’s. You won’t even need Hendrix’s long fingers to pull that one off!

The Epiphone Vintage Deluxe tuning machines with white pearloid knobs are based on the old Kluson tuners that Gibson used in the ‘50s. They are perfectly serviceable, look period correct and hold a tuning nicely. Normally, replacing the tuners on a lower-priced guitar with more stable machines such as Grovers is recommended. But these work fine. In fact, the guitar arrived from Gibson’s Nashville headquarters perfectly set up and ready to play. It was even in tune. This is a rarity in factory- or retail-fresh guitars. Strumming chords unplugged, straight from the case, the sound filled the room. Billie Joe’s Junior is incredibly resonant, projecting like a good acoustic guitar. You could easily set a mic in front of the strings in the studio and record a fake acoustic track with this.

But this is an electric guitar. How does it sound through an amp? Raw, throaty and raunchy, like a Les Paul Junior should. There’s no greater tonal recipe than a P-90, a solid mahogany body and a loud tube amp. Epiphone’s PRO P-90 is hot-wound and features adjustable pole pieces to tweak the signal coming from each individual string — an innovation not normally seen even in Gibson P-90s. Electronically, Epiphone stocked the guitar with pro-grade CTS potentiometers — high-quality components are used through and through. 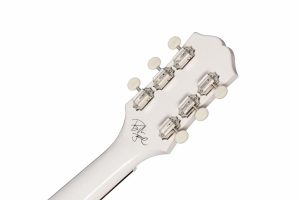 Plugged into a three-channel, all-tube 60-watt Blackstar HT Stage 60 combo amp, the Billie Joe Armstrong Les Paul Junior roared! It distorts perfectly. But the single-coil nature of the P-90, despite its inherent fatness, means a chord’s individual notes articulate and bloom beautifully. Playing a selection of New York Dolls, Heartbreakers, Sex Pistols, Clash and (yes) Green Day tunes, the power chords rasped and crunched perfectly. Leads screamed and slashed. Yet dialing back the volume control cleaned the signal up nicely. Yes, this guitar can do country, jazz, blues or jangly folk rock. But make no mistake — this guitar lives to be played on 10. It is a punk-rock machine.

Read more: A beginner’s guide to Green Day: from the big hitters to the deep cuts

At $549 retail, it puts a professional-grade instrument in the hands of working musicians, hobbyist players and beginners alike. It’s versatile but is best at raw rock ‘n’ roll and punk rock. You can feel why Armstrong, Thunders, Richards and all these other legends love the Les Paul Junior. It won’t make you play just like Armstrong, but you can experience the same mojo he feels when he straps on Whitey. And you can take this guitar and connect with it, creating your own magic. You can make it your own musical weapon of choice. And maybe you can create your own piece of rock ‘n’ roll history with it.

For a chance to win an Epiphone Billie Joe Armstrong Les Paul Junior, head over to Instagram and respond to the question on our post to participate. The giveaway ends Dec. 15.