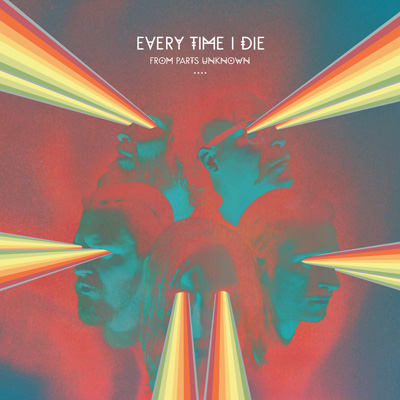 You know what happened when Converge guitarist Kurt Ballou was enlisted to produce the new Every Time I Die album? Pure sweaty, spitting, bleeding bliss rained down upon the scene—and it was good. On From Parts Unknown, Ballou has captured a band of MVPs, pushing drummer Ryan Leger up into the mix for maximum propulsion, and steering guitarists Jordan Buckley and Andy Williams into sonic demolition derbies (“The Great Secret,” “Thirst”) that hearken back to 2009’s New Junk Aesthetic, seemingly fueled by some mix of vengeance, battery acid and bathtub napalm. Frontman Keith Buckley has maintained his stature with a seething that would make Henry Rollins perk up from his MacBook. (“All I want is for everyone to go to hell/It’s the last place I was seen before I lost myself,” he growls on the album’s stunning closer, “Idiot,” continuing, “All I want is for everyone to come to hell/There we can be free and learn to love ourselves.”)

When Buckley takes a more melodic approach as a vocalist, he stands tall alongside folks like the Bronx’s Matt Caughthran (“Decayin’ With The Boys”) and Josh Homme (“Overstayer”). Buckley’s still a bad-assed dealer of non sequiturs: When he exhorts, “Don't freeze up in the headlights. Welcome it in” (from “Pelican Of The Desert”), he comes off like that friend you have, the one who says you’re only “buzzed” after seven beers and insists you can drive faster. And you love him for it, of course.

There’s so much relentless rock, lyrical invective and ugly chords on From Parts Unknown to tantalize young mosh-pit warriors (“All Structures Are Unstable”), grizzled metalheads (“Old Light”) and eggheads who like their aggression slightly askew (dig that repetitive piano note intro on the glass-smashing “Moor”). This band may be close to two decades and seven albums in, but in these here Parts, Every Time I Die are coming out of the box like airborne wolverines lunging for the world’s carotid arteries. Don’t even try pushing them away—you’ll just end up tasting the floor.