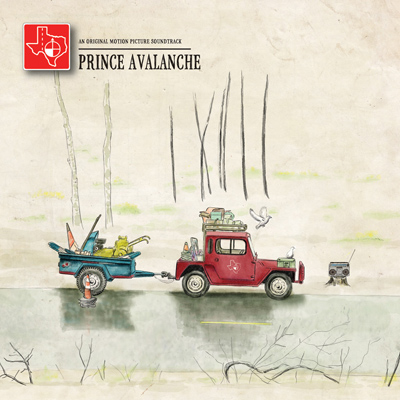 Let’s start this off with some disclosure: I haven’t seen Prince Avalanche. And judging by the bits and pieces of information afforded by various online sources, chances are I never will. The terms “dramedy,” “dialogue-driven” and “developing friendships” kept creeping up during the research phase of this review, and if all you want to do is watch a steroid-ravaged Sly Stallone aim M-80s at the collective tibia and femur bones of Southeast Asia or man fight self-aware machines, Prince Avalanche ain’t the place you’re gonna find admittedly violent and implausible action scenes. However, the music of soundtrack veterans Explosions In The Sky (NBC’s Friday Night Lights) are air-tight locks for accompanying a movie about two dudes finding themselves and each other while repainting traffic lines on a desolate Texas highway.

David Wingo, a film composer whose diverse style has backed Snow Angels, The Sitter and Gerrymandering (one of the few movies in which Arnold Schwarzenegger appears without actually killing anyone/thing), teams up with the West Texas post-rock deities to create evocative pieces based on the balance between delicacy and enormity. Neither “Join Me On My Avalanche” nor “Send Off” drives or pounds the way a typical EITS crescendo does, but its progression is dulcet and incredibly melodic, given room to breathe while Wingo incorporates “atypical” instrumentation like banjos and trumpets. It’s a cop-out to say tracks like “Alone Time” and “An Old Peasant Like Me” are cinematic, but that’s precisely the mood created by the vast, spacious guitars and Chris Hrasky’s restrained drumming.

Of course, like any soundtrack, there are a number of pieces that end as quickly as they begin (“Fires,” “The Adventures Of Alvin and Lance”), their existence only making sense in the context of the film itself. Overall, however, Prince Avalanche contains songs that make this an album you can spin even if you have no interest in the film itself while illustrating the versatility of both EITS and Wingo. Plus, this collaboration gets a much shinier seal of approval than that Lou Reed/Metallica clusterfuck.

“Join Me On My Avalanche”