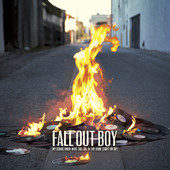 Fall Out Boy's first new music in four years is something of a puzzler—unless you see the music video. There has been a massive nostalgia train running through AP's scene in recent years, thanks to reunions aplenty and tons of “classic albums front-to-back” touring, so of course when the rumor mill started churning regarding FOB's return, people were fair to assume some sort of Take This To Your Grave 10-year anniversary tour and maybe a throwback single to get everyone in the mood. It's doubtful that anyone expected a rumbling R&B/hip-hop hybrid club jam with virtually no semblance of anything remotely Fall Out Boy-esque, sans Patrick Stump's instantly recognizable vocals. (Really, this song could easily have fit on his poorly received solo album Soul Punk, at least musically). Of course, the video explains a lot of this: It's three minutes of hot rapper of the moment 2 Chainz and two sultry assistants literally torching FOB's past, from a CD copy of Evening Out With Your Girlfriend and an LP of From Under The Cork Tree to assorted FOB memorabilia. Then, the video ends with the reveal that Fall Out Boy themselves are tied up and bound, presumably next up for execution. It's a great visual moment, and one that speaks volumes about the band's post-hiatus career: Fall Out Boy as you know and love them are more than likely dead.

As for Pete Wentz's lyrics, the chorus is rather weak (“My songs know what you did in the dark” is the kind of heavy-handed ex-lover accusation that we thought Wentz had grown out of by Folie a Deux), and the verses are nothing drastically different stylistically, either. The real concerns, though, are the following: Where are the guitars? Where are the drums? Where is the band? This isn't the Fall Out Boy we grew up listening to, but then again, the band have never repeated themselves over the course of their career, for better or worse. We give them points for continuing to try new things, but we're not going to hold our breath for From Under The Cork Tree Pt. II with their new album, Save Rock And Roll. Consider us officially cautiously optimistic.