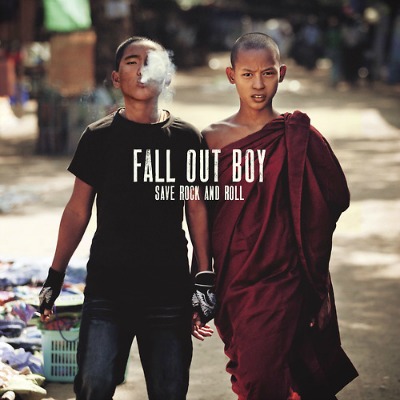 Save Rock And Roll

When Fall Out Boy went on indefinite hiatus in late 2009, they had no way of knowing how much they would be missed. After all, vocalist Patrick Stump likened touring in support of 2008’s Folie À Deux to “being the last act at the Vaudeville show: We were rotten vegetable targets in Clandestine hoodies,” saying “at no other point in my professional career was I nearly booed off stages for playing new songs.” But in the three-or-so years the band members spent playing other music, the clamoring for Fall Out Boy’s return never waned.

As a result, there’s absolutely no way the quartet’s hiatus-is-over album, Save Rock And Roll, can live up to the expectations placed upon it. So Fall Out Boy made the wise decision to write and record this album in secret, ensuring the only people they had to answer to were themselves. Perhaps that’s why Save Rock And Roll feels like a defiant statement, one that shows marked creative growth and a desire to obliterate musical boundaries.

In fact, the rest of the album expands upon the aggressive genre blurring found within “The Phoenix” and “My Songs Know What You Did In The Dark (Light 'Em Up).” The misfit rallying cry “Alone Together” is cast from a modern pop/R&B mold, while the whirling dance-rock highlight “Where Did The Party Go” boasts a disco-riffic bassline and “na-na-na” chorus cries, and “Death Valley” is fired-up soul-rock with a brief dubstep wobble. Meanwhile, “Miss Missing You” is an effervescent keyboard-pop anthem, the foot-stomping acoustic jam “Young Volcanoes” is a campfire-ready holler and the mid-tempo “Just One Yesterday” is aching torch-pop laced with brittle piano and vocal contributions from British singer Foxes.

Although Stump’s and Foxes’ harmonies are sublime, most of the album’s guest stars don’t actually improve the songs on which they appear. Dirty guitar riffs, snake-charmer grooves and menacing programming touches ultimately overshadow rapper Big Sean’s double-entendre-filled bridge during “The Mighty Fall.” Elsewhere, Courtney Love’s stream-of-consciousness poetry on the irresistible “Rat A Tat” (“No thesis existed for burning cities down at such a rampant rate/No graphics and no fucking PowerPoint presentation”) is delightfully unhinged, but is secondary to the song’s bratty punk chants and breakdown-lite choruses.

Despite these disparate influences, every song on Save Rock And Roll boasts huge choruses and catchy hooks. In fact, the album is perfectly calibrated for Stump’s strengths as a vocalist; he sounds as confident as he’s ever sounded on a Fall Out Boy record, whether crooning (“Young Volcanoes”) or breaking out the glam swagger (“My Songs Know…”). Producer Butch Walker does a nice job teasing out the band’s strengths and keeping the album cohesive despite the diversity. (In this way, it’s reminiscent of another strong “comeback” album Walker had a hand in, Panic! At The Disco’s Vices & Virtues.)

For all of its upbeat music, however, Save Rock And Roll’s lyrics tell another story. The word “fire” and the concept of “burning” are recurring themes, while many of the band’s trademark zingers (“You're wearing our vintage misery/No, I think it looked a little better on me” and “The person that you'd take a bullet for is behind the trigger”) have sharp edges. Songs mainly tussle with internal conflicts rather than external ones: struggling to grow up, being envious of the young, feeling betrayed in love, missing past happiness. Particularly biting are “Just One Yesterday,” which discusses wanting someone back while also wanting to make them pay for breaking your heart (“I'm here to give you all of my love/So I can watch your face as I take it all away”), and “Where Did The Party Go,” which laments that kids who used to revel in sweaty rock shows are now people “doomed to organizing walk-in closets like tombs.”

But it’s the album’s final song, the “What A Catch, Donnie”-reminiscent title track, that gets at the heart of both the album and Fall Out Boy in 2013. A subdued, piano-driven tune featuring Elton John and strings from the London Symphony Orchestra, “Save Rock And Roll” reads like a series of Post-it notes the band wrote to themselves as they navigated their return. The lyrics declare that other acts besides Fall Out Boy are “the voice of [a] generation” further stating, “You are what you love/Not who loves you/In a world full of the word ‘yes’/I'm here to scream/No”—before ending in a confident declaration: “Oh no, we won't go/'Cause we don't know when to quit.” What didn’t kill Fall Out Boy clearly made them stronger.

Admittedly, it takes a few listens for Save Rock And Roll to click, and some songs (“Alone Together,” “Miss Missing You”) are notably weaker than others. But overall, Save Rock And Roll is a blast of an album. It’s also gutsy: No matter what direction Fall Out Boy went, people would be disappointed. So to release a collection of music that’s a noticeable progression from their past albums—but one done entirely on their own terms—is brave. Save Rock And Roll might not actually, well, save rock and roll—but it certainly has brought Fall Out Boy back from the brink.