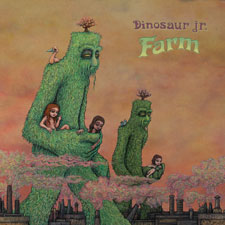 Fans have long debated the merits of Dinosaur Jr.'s various lineups but the seminal band have always been the J Mascis show–a deafening, overdriven rhythmic drone and crash-bang drums under the frontman's not-quite-discordant guitar workouts and nasal vocals that float like bong smoke. Farm, the second album from the reformed classic lineup of Mascis, bassist Lou Barlow and drummer Murph, isn't the kind of Dino record that has a keeper single like "Start Choppin'" or "Feel The Pain." Instead, it boasts some of Mascis' biggest departures under the Dino name. "Your Weather" is a surprising interpretation of vintage Britpop; "Said The People," seven minutes of in-the-red blues, could be a Black Keys cut; and the grating harmonies in "Imagination Blind" are worthy of Neil Young–which could be exactly what Mascis always wanted.

I Want You To Know