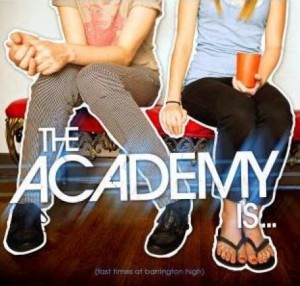 There’s no getting around the fact that the Academy Is… write catchy pop songs. A cursory listen of their third full-length album, Fast Times At Barrington High, and any number of hooks could be stuck in your head. From the repetitive “forever young” line (“Summer Hair = Forever Young”) to “I’m not in love/This is not your song” (“About A Girl”) to the days-of-the-week countdown on “His Girl Friday”, initially there seems plenty to sing along with. Unfortunately, the songs start to blend together as the disc progresses, and once the music has stopped, it’s not as easy to individually recall any of the songs.

Musically, TAI-frontman William Beckett, guitarists Michael Guy Chislett and Mike Carden, bassist Adam Siska and drummer Andy “the Butcher” Mrotek-aren’t doing anything out of the realm of 2005’s Almost Here and last year’s Santi. Most of the songs are vibrant pop, with the occasional ballad (“After The Last Midtown Show”) thrown in to bring down the pace. But what they do, they do well, so there’s not necessarily a compelling reason to step outside their comfort zone. They do use some interesting, almost robotic vocal effects on the intro to “Crowded Room.” and “After The Last Midtown Show” is more touching than “Everything We Had,” the balled from Santi.

Thematically, TAI do have an interesting concept. Focusing on their high school experiences in the Chicago suburbs (the title's a reference to Beckett and Siska's high school), many of the songs will ultimately speak to their core audience. Plus, high school is a rather universal experience for the most part, so many of their older fans will be able to easily relate to the stories of getting picked on by jocks and slipping notes to cute girls in the hall.

If anything, though, the timing seems a little strange. The album seems to champion looking back on school (as in the end of the school year, getting ready to start summer, rather than an album set at the end of the summer looking toward the next year). Audiences may’ve been better served if they had the whole summer to play these tunes-as they are made for driving with the windows down on a hot summer night. Either way, previous Academy Is… fans will surely dig the tunes, but Fast Times is probably not the album that will see the band expand their scope too far out of the high school/Warped Tour crowd.