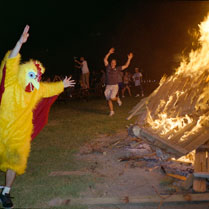 Fireworks’ debut full-length, 2009’s All I Have to Offer Is My Own Confusion, was a detour through the last 10 years of pop-punk; in that respect, nothing has changed on Bonfires. The songs on this four-song EP are like a “name that pop-punk tune” game, with parts that sound exactly like Your Favorite Weapon-era Brand New and Fall Out Boy ca. Take This To Your Grave.

But while Fireworks’ sound hasn’t matured, the songs are considerably better. Pop-punk thrives on high energy and simplicity, two things Fireworks lost sight of on Confusion. This time around, they’ve trimmed the fat, quickened the tempo and gave the hooks a facelife, creating a much more memorable release. Lines like “There’s nothing I’d rather do/Than break fire codes with you” (from “I Grew Up In A Legion Hall”) practically beg for crowd participation from sweaty youth across the country, an event that will surely occur show after show.

While Fireworks still haven’t quite found their own voice, they are a band with tons of potential. If they coupled their increasingly strong songwriting skills with a more inventive sound, there would be no stopping them. But as of now, if you’re down for the same old shit that’s done better than most, you are going to be pumped. Like, real pumped.

“I Grew Up In A Legion Hall”