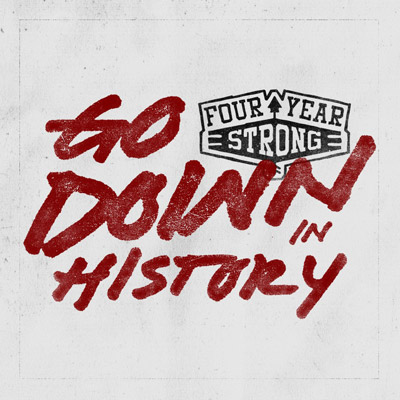 Go Down In History EP

Four Year Strong fans will breathe a collective sigh of relief when they get their mitts on Go Down In History, the latest from the Worcester, Massachusetts, popcore beard-punks since  2011's lukewarm arena-rock experiment, In Some Way, Shape Or Form. Seconds into the chugging onslaught that announces opening track “What’s In The Box?” the message is clear: The FYS who blew the roof off the scene with 2007’s Rise Or Die Trying and 2010’s Enemy Of The World are back, with a vengeance.

The five-song EP (their first release with new label Pure Noise Records) is a tantalizing taste of what’s hopefully to come when FYS drop their next full-length. The tempos are turbocharged; the guitar riffs intricate and unexpected. The EP has that undeniable energy of the band’s earlier records, yet the production glistens like FYS were still on a major label. Drummer Jake Massucco and bassist Joe Weiss blast rhythms with over-caffeinated East Coast fury and the group’s songwriting core—vocalists/guitarists Alan Day and Dan O’Connor—seem to have rekindled their sheer love of musically ripping people’s faces off. We even get to enjoy some old-school FYS gang vocals, like the soaring refrain that bookends the EP’s title track, reminiscent of “Enemy Of The World.” These are all excellent things.

It’s not just a stylistic return to form, either. The songwriting is daring yet tightly focused, catchy yet crushing, but executed with a level of skill that’s an obvious reflection of the band’s greater experience. “Tread Lightly” ranks up there with any of FYS’s top-shelf past material, with a pit-inducing rapidfire verse, then a crunching, drop-speed chorus that clobbers you over the head and is just so damned cool, you want to hear it again and again. Closer “So You’re Saying There’s A Chance…” builds to a gigantic hook, but how it gets there amid FYS’s stew of time changes and smooth, speed-picked guitar lines is no small wonder. Then there’s “What’s In The Box?” which harkens back to the Rise era with its chunky chords and lyrical swagger, but a very different message: Day and O’Connor aren’t young punks out to conquer the world anymore; they’ve already been up, and they’ve already been down, but most importantly, they’re still here—and that’s something worth singing about.