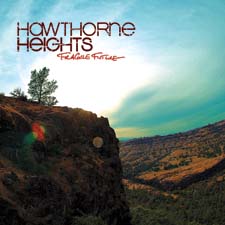 It's almost impossible to fathom how much Dayton, Ohio, quintet Hawthorne Heights had to overcome to release their third album; lesser bands would've crumbled under the circumstances detailed in this issue's feature. Amazingly, HH not only recovered but made their sound better than ever on Fragile Future. Standout track “Somewhere In Between” is pulsating rock driven by drummer Eron Bucciarelli; frontman J.T. Woodruff turns in a career-best vocal performance on “Desperation”; and the band aren't afraid to experiment a little, as seen with the piano interlude of “Until Judgment Day.” Power ballad “4 Become 1” and the rumbling “Sugar In The Engine” are the only songs overtly about fallen guitarist/screamer Casey Calvert, and they're handled with the utmost respect. Hawthorne's sound has pushed beyond screamo-pop into strong guitar rock, with “Disaster” possessing a Jimmy Eat World-esque vibe. As with prior releases, Woodruff's lyrics can be hokey, but his Midwestern earnestness makes it easy to let it slide.