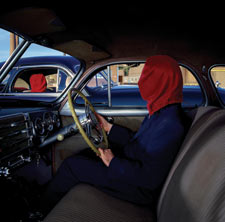 While it’s fun to dream of an At The Drive-In reuion that’ll never happen, it’s a shame people are still pining for that band, because ATDI’s most curious-looking members have moved on to some frighteningly next-level shit with their second album. Conceptually rooted in worlds, characters and languages (the song titles are in a sort of Martian-Egypto-Latin) we’ll only pretend to understand, Frances The Mute ricochets out of the speakers like a super-focused, hundredfold expansion on the prog-salsa-jazz-punk of 2003’s De-loused In The Comatorium. It also sounds like it was recorded in 1973-both in terms of tone (alive and analog), rhythm (born earlier, Jon Theodore could’ve been Tony Williams’ successor) and vocabulary (somewhere between Miles Davis’ electric period and his one-time guitarist John McLaughlin’s meeting with Carlos Santana, via Cuba). It also has no justifiable hit, no commercial aims-for example, the single is more a creative excerpt than a concrete pop song-and no earthly limitations. Which means, of course, it’s already the most riveting album of 2005-provided you’re ready to carve a wide enough hole in your consciousness to accept it.

IN-STORE SESSION With the Mars Volta’s guitar god and producer, Omar A. Rodriguez-Lopez.

What sort of evolution do you see in the band between De-loused In The Comatorium and this record? A lot of the concepts that Cedric [Bixler-Zavala, vocals] and I discussed when starting the band got pushed aside [previously], because we still had all this-I don’t know if it’s nervous energy, but a lot of things we needed to get out of our system. And those concepts are showing themselves more in this record-for example, having lyrics here and there in Spanish; or having more rhythms of the timbal or the guaguanco, or salsa rhythms; or having long, ethereal pieces that are all about colors and feeling, as opposed to notes. Not that these things aren’t in De-loused, because they are-just as those same elements were in At The Drive-In records. It’s just that if you look at the lineage, you’re able to see they’ve evolved more to the forefront now.

For a rock band to write songs like these in 2005-at least at the level where you guys are operating-is a foreign concept for a lot of people. Are you anticipating the same response you got last time from some critics-you know, “These guys don’t write songs; they need an editor; etc.”? To some degree, it bothers you when you hear someone say, “They don’t have songs,” but you’re prepared to deal with it, because you’re like, “Well, they just don’t understand.” If a person can’t conceive of a band having a 32-minute song, then that means I couldn’t have a conversation with them about Funkadelic’s first record, or a Miles Davis record, or anything that’s really interesting and groundbreaking to me. Our conversation is going to be very limited. I don’t judge them for it; it’s cool, and people need three-minute songs they can latch onto and understand. Other people just have a different perspective.

Larry Harlow is a salsa legend-how’d you get him to play piano on the record? When we were first talking to labels, we were at Universal, and they had a picture of Jimi Hendrix on the wall, and the president there said to me, “You know, we’ve had some interesting guitar players on the label-who’s your biggest inspiration?” I said, “My biggest inspiration is Larry Harlow, but he’s a piano player.” [Laughs.] That’s the whole reason I play guitar-the piano doesn’t like me. And just by chance, he goes, “Larry Harlow-my son knows him!” I thought it was cool, so in passing, I said, “Send him the Tremulant EP and see what he thinks.” Sure enough, a month later, I get this e-mail from [Harlow] saying he heard our CD, and, you know, rock really isn’t his thing, but he likes it and he can hear [his] influence in our music, and I should give him a call. So I’ve been talking to him since then. He was supposed to play on De-loused, but timing-wise, it didn’t work out.

Is there a central theme to this record, like there was with De-loused? There’s definitely a theme and a concept-it’s not something I feel I could completely convey at this moment, and I’d rather people just have the record and read the lyrics and get their own sense of what it’s about. That’s something that turns off a lot of people, you know: “Oh, no! It’s a ‘concept record.’” To me, that’s as laughable as the title “emo band.” If you’re making a piece of music that doesn’t have emotion, or if you’re making a piece of music that doesn’t have an idea or concept behind it that helps you focus on it, then most likely, I don’t want to hear it, because then I just picture four males sitting around a studio, going, “’What’s that?’ ‘I dunno; fuck it.’ ‘Let’s do that, then; it sounds rad.’” [Laughs.]

So it’s not like you’re saying, “In this movement, the guitar will convey sadness…” Right-it’s the same as having a producer: [A concept] guides the record; it just does it in an organic, internal way. Because if not, then you just have four, five people who aren’t communicating, and that’s going to show in the final product.

Who’s Frances The Mute? Frances The Mute is the nickname of the mother of the main character in this record, so it actually has very little to do with the record, but it also has everything to do with it, because it’s the mother; it’s the birthplace; it’s the origin. The record is not about Frances, though. [Laughs.] It’s about someone else. -Aaron Burgess